On October 15, 2018, the Fondation Hôpital de l’Enfant-Jésus of Caraquet launched its major fundraising campaign to the public. This was the first major campaign in its history under the theme « Together, let’s support the people of our region in their fight against cancer. »

The money raised during this campaign will enable the oncology service to adapt to new standards and acquire cutting-edge equipment and facilities. The project was then evaluated at more than $1.2 million, $600,000 of which was the goal for the major fundraising campaign.  This is a vital project for the population of the Acadian Peninsula, as it will allow for the development of high-level facilities that will improve the quality and safety of care and services offered to oncology patients in our region.

Several meetings were made by our volunteers with different companies, organizations and individuals. All these meetings, without exception, were very successful because they all had the cause at heart, they all had someone in their family or closely affected by this terrible disease.

But it didn’t end there. With the excitement in the community and the needs that remain to be met, it was unanimously agreed to continue with the campaign!  The public’s great generosity has allowed us to go even further. We can offer even better service with the addition of equipment that is related to the fight against cancer. Therefore, in February 2019, we announced an additional $215,000 that will be dedicated to the acquisition of equipment. The revised objective is $815,000 and the total project is now valued at more than $1.4 million.  The funds raised will be used not only to redevelop the oncology department, but also to acquire equipment for the Medical Imaging Department and the outpatient clinic with appointments at the Enfant-Jésus Hospital, thus enabling us to improve diagnostic and follow-up services. This will allow patients to get a diagnosis faster and at home.

The project is valued at more than $1.4 million and our Foundation is proud to be a partner of Vitalité Health Network, which is contributing $600,000 to the realization of this project. On September 18, 2019, the Foundation celebrated the closing of this first Major Campaign with the final amount of $860,000.

Jérémie and his mother’s testimonial on the importance of health care close to home. 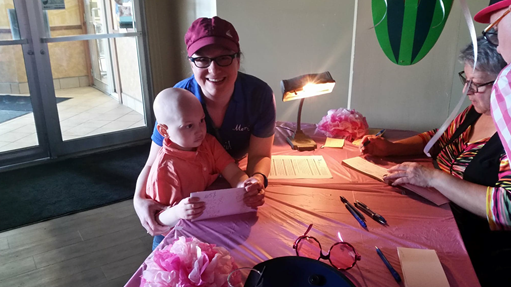 Jessica Ward, mother of a six-year-old boy who has brain cancer, talks about the importance of having access to services close to home.

“In July 2014, we came face to face with the unimaginable. Our only son, then not quite three years old, was discovered to have a cancer of the brain and spinal cord. After spending 10 months in Quebec hospitals, we came back home to Bertrand. However, the break was short-lived. A few months later, his cancer was back. Jérémie was four at the time.

Now at the age of six, Jérémie continues his fight against the disease. He is resilient and faces his fears. My son is my hero. Seeing him love life despite everything he has to overcome gives me the strength to continue and give the best of myself.

For us, getting treated close to home makes all the difference. Since we found out about his relapse, Jérémie has received 115 chemotherapy treatments at the Chaleur Regional Hospital Oncology Clinic. Despite having to do the Acadian Peninsula to Bathurst round-trip for his chemotherapy treatments, being able to sleep at home, surrounded by our own things, makes all the difference. We have a semblance of normal life.”

“Even after eight years as Chair of the Radiothon for the Caraquet area, I’m astonished at the generosity of people.  We often say that together we can make a difference and an event like this one clearly shows it. Over $ 165,274 was raised in the Chaleur and Acadian Peninsula region. On my behalf and on behalf of my colleagues, I wish to thank not only the volunteers who work on the day of the Radiothon but also all those who work throughout the year.  I also wish to thank all donors. It’s thanks to you all that we can say, mission accomplished.”

Joseph Lanteigne, Chair of the Roses Radiothon for the Fondation Hôpital de l’Enfant-Jésus