Warning: Use of undefined constant ’ - assumed '’' (this will throw an Error in a future version of PHP) in /var/www/vhosts/athomefirst.ca/httpdocs/wp-content/themes/hello-theme-child-master/functions.php on line 38

Warning: Use of undefined constant ’ - assumed '’' (this will throw an Error in a future version of PHP) in /var/www/vhosts/athomefirst.ca/httpdocs/wp-content/themes/hello-theme-child-master/functions.php on line 63
 Conclusion of the Major Fundraising Campaign – Tracadie – At Home First

On October 23, 2018, the Fondation Les Amis de l’Hôpital de Tracadie launched its major fundraising campaign to the general public. This is the first major campaign in its history under the theme “Improving health services in our region.”

Funds raised will help finance two projects, namely the modernization of the Dialysis Unit and the creation of a Chronic Disease Management Clinic. The projects are valued at over $1.5 million dollars including the $950,000 goal for the Major Fundraising Campaign. This $950,000 campaign is much more than a financial objective, it’s a community project.

Numerous meetings were held by our volunteers with different companies, organizations and individuals. All these meetings, without exception, were very fructuous because all of them had these causes at heart, they all had someone in their family or closely affected by dialysis or chronic diseases.

The major fundraising campaign, the largest in our Foundation’s history, confirmed a significant portion of the funding needed to renovate the Dialysis Unit and create a Chronic Disease Management Clinic.

By giving to the Foundation, you have at the same time illuminated the sometimes very dark daily lives of patients who are going through difficult times and are looking for light at the end of the tunnel.

Today, we are very proud of our commitment by being the carrier of this major project.  The project is valued at more than $1.5 million and our Foundation is proud to be a partner of Vitalité Health Network, which is contributing $600,000 to the realization of this project. 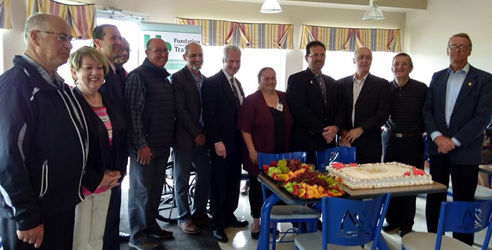 The Coopérative Régionale de la Baie (IGA) Ltée de Tracadie celebrated the 15th anniversary of its Loto 50/50 coop santé communautaire with its members today. To thank its members for the considerable support they have offered in recent years, the Coopérative held its regular draw but also drew 15 extra $1000 prizes. A number of dignitaries were in attendance for the draws and cake cutting.

The Loto 50/50 coop santé communautaire has allowed the members of the Coopérative Régionale de la Baie (IGA) Ltée de Tracadie to share, with the Fondation Les Amis de l’Hôpital de Tracadie Inc. and various organizations in the region a total of almost $7 million.

From left to right: Keith Chiasson, Chief of Staff for the Minister of Environment and Local Government; Pierre Ferguson, president of the Regional Bay Cooperative; Philippe Ferguson, President of the Friends of the Tracadie Hospital Foundation; Gilles Lanteigne, President and CEO of the Network; Gina Losier, medical laboratory technologist; Denis Losier, Mayor of Tracadie and Stéphane Legacy, Vice-President of External Consulting Services and Professional Service

The Vitalité Health Network inaugurated its new facilities for the phlebotomy service at the Tracadie-Sheila Hospital during an official ceremony which took place in front of several guests and dignitaries presented at the event.

This project, at a total cost of $ 401,850, was made possible thanks to a partnership between the Vitalité Health Network ($ 170,650), the Regional Cooperative of the Bay ($ 200,000) and the Fondation Les Amis de l’Hôpital de Tracadie Hospital ($ 31,200). The improvements include the addition of new equipment and adapted workspace as well as the redevelopment of existing spaces, including the waiting room.