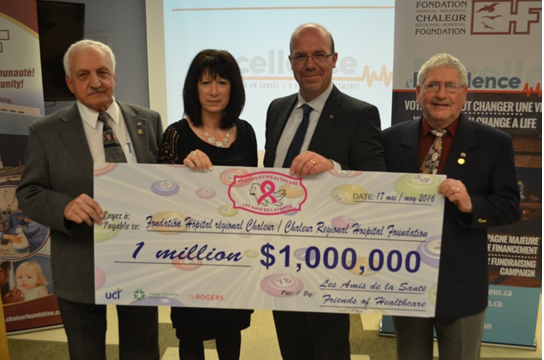 The 2016 Chaleur Regional Hospital Foundation Major Fundraising Campaign was launched under the theme Excellence, a healthy investment. With major campaign players present, namely René Legacy, Campaign Chair, as well as a number of dignitaries, this event was concluded with the announcement of an exceptional $1 million donation from the Friends of Healthcare, a group made up of René Beaudet, Chair, Wendy Aubé, Gilles Haché and Robert Beaudet.

“The Friends of Healthcare have been a long-standing partner of the Foundation and this one-time historical donation allows the Foundation to launch its campaign on very strong foundations,” said René Beaudet, Chair of the group. “The exceptional announcement of $1 million this morning is a motivation for the whole team and it will certainly have an influence on other potential donors.  We want to thank the Friends of Healthcare for their great generosity and are proud to associate their name with the new auditorium, integrated ambulatory units waiting room, and gymnasium for the facility staff,” stated René Legacy, Campaign Chair. At the time of its launch in 2016, the campaign has set a goal of raising 5 million dollars in five years.

The Fishermen of the Maritime Fishermen’s Union (MFU) of the wharfs of the Chaleur region donate $63,000 to the Chaleur Regional Hospital Foundation. 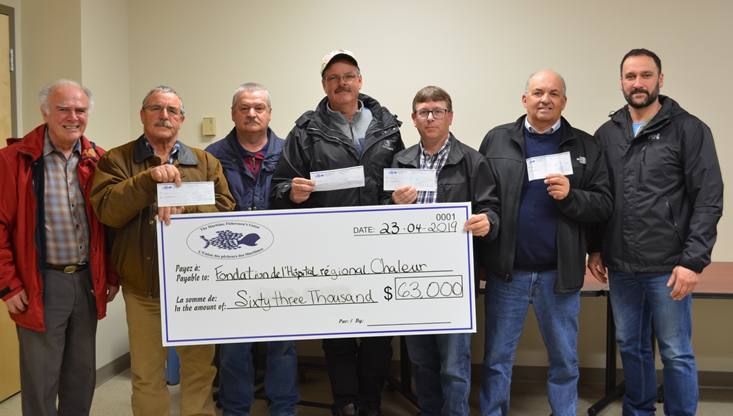 The fishermen of the Maritime Fishermen’s Union (MFU) of the wharfs of the Chaleur region made an important donation of $63,000 towards improved care and services in the sectors of the fight against cancer, the Mother-Child program, the fitness trail, Ambulatory Care as well Nuclear Medicine.  This donation will allow for the purchase of equipment for these sectors to offer the best care and services at the Chaleur Regional Hospital.

The Chaleur Regional Hospital Foundation is very pleased to announce this new partner.  This commitment will make a real difference in the care offered to the population.  An amount of $15,000 will be given to the Roses Radiothon towards its fight against cancer to purchase equipment in the diagnostics, cancer treatment and follow-up for the people of the region.  The Mother-Child program will receive $10,000 to purchase a device that will offer more comfort during treatment of newborns that have jaundice.  An amount of $15,000 will be invested in a new project, the Fitness trail, that aims to counter obesity in children and support those that are affected by mental health illnesses.  The Ambulatory Care sector will receive an amount of $3,000 for the purchase of a saturometer as well as a television that will be installed in the waiting room for patients that must remain for the day.  The Nuclear Medicine sector will receive $20,000 towards the purchase of a mobile cardiac monitor for their new nuclear medicine room.